Federal tax deductions and credits for home ownership are typically available to joint owners of all types, but things can get complicated when multiple owners are involved. Use these tips to clear up the tax complications associated with joint ownership and ensure you get full access to your tax breaks.

A piece of real estate owned by more than one person can fall under one of three different ownership conditions, depending on the situation and the owners' relationship to each other. The ownership status partly determines how owners pay property taxes and claim homeowner deductions and credits, so it's important to know which type applies for your home.

You can typically find your ownership type on the property deed or mortgage paperwork. If neither document specifies the ownership type, the IRS will usually assume that you own the house as tenants in common.

As tenants in common, owners can claim different proportions of various deductions and credits, instead of splitting them evenly. For example, two joint owners with a joint tenancy arrangement would by default have to split the home mortgage interest deduction 50/50, but if the same two owners have tenancy in common, they can split the deduction 50/50, 75/25, or even 100/0 if they choose.

File Jointly if Married to a Joint Owner

If you're married to the other joint owner of the house, you can avoid tax complications by filing a joint return with your spouse. Since 'married filing jointly' status pools all the couple's income and expenses on one tax return, you can simply put the full value of any credits or deductions on that return. This keeps you from having to figure out who paid what.

Spouses in these states must split their marital income and expenses 50/50, and the IRS honors this law. So, in a community property state, even if one spouse pays 100% of the expenses related to the house and they file separate tax returns, they must each claim 50% of the relevant deductions and credits. Of course, you can avoid this issue by filing jointly per the above tip.

Include a Statement for Mortgage Interest Deductions 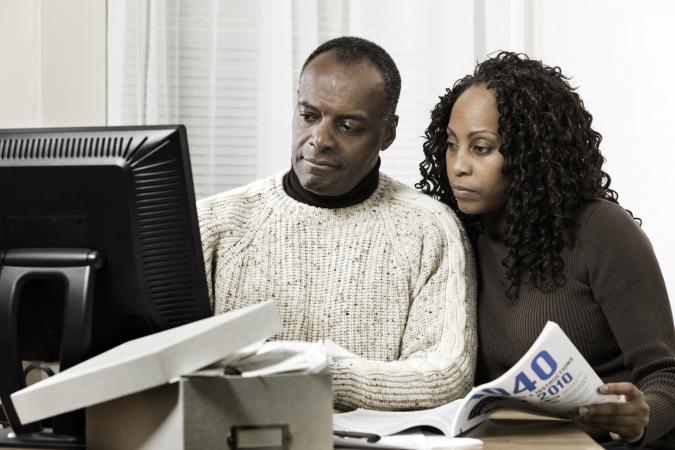 If several people own a house jointly, then they can typically deduct mortgage interest based on their share of ownership in the house. For example, someone who owns 50% of the house can legally claim 50% of the mortgage interest as a deduction. However, the 1098 form that mortgage lenders send to the borrowers and to the IRS may not list all the owners, and certainly won't spell out their ownership percentages. In fact, lenders often send the 1098 form only to the first person listed on the mortgage documents and include only that person's social security number. In that situation, the IRS will assume that the listed owner is the only one eligible to deduct the interest.

The real estate taxes and (if applicable) mortgage insurance premiums paid for the year also typically appear on the 1098 form. However, the IRS isn't as picky about how joint owners divide up these deductions. As long as the claimed amounts for all owners add up to the total listed on the 1098 form, joint owners can simply claim these deductions on Schedule A and don't need to include a separate statement.

Split the Residential Energy Credit Based on Expense

Homeowners who make certain energy-efficiency upgrades to their homes can qualify for tax credits. Joint owners may divide up these credits based on how much each owner spent on the upgrades. For example, if two joint owners of a house bought a solar-powered hot water heater and the first owner paid 60% of the cost while the second owner paid the other 40%, then the first owner could claim 60% of the related credit and the remainder of the credit would go to the second owner. Both owners would need to file Form 5695 with their tax returns to claim their shares of the credit.

Cover All Debt, Even if it Isn't Yours

If you own a home jointly with another person, you can be held liable for any failure to pay the entire amount of any debts related to that house, even if that responsibility technically belonged to another owner. Thus, it's usually better to pay the whole bill rather than let it slide even if it's not legally your responsibility. In that situation, consult with your legal advisor to see if you have any recourse, such as suing your delinquent co-owner for the funds.

If you own a home jointly with another taxpayer, your liability depends on your relationship as stated in the mortgage or property deed. You can be held liable for any failure to pay the entire amount of taxes due, even if that responsibility technically belonged to another owner. Use these tips to protect yourself against such a possibility, as well as to maximize any deductions to which you are entitled.